(I wrote this for the parish blog last night and it is not as well developed as I might like, but I put it out there and put it out here too. Happy and Blessed Epiphany! I wish you faith, hope and light!) 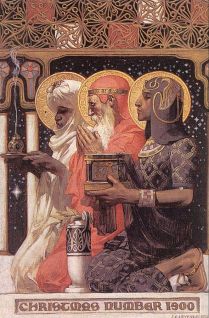 What a difference! The three kings had only a rumor to go by. But it moved them to make that long journey. The scribes were much better informed, much better versed. They sat and studied the Scriptures like so many dons, but it did not make them move. Who had the more truth? The three kings who followed a rumor, or the scribes who remained sitting with all their knowledge? –Soren Kierkegaard

Thursday January 6 marks the actual date of Epiphany, even though we celebrated it on Sunday. We have such vivid images of the 3 Kings or the magi, yet we don’t really know too much about them.

I am struck by two things on this Epiphany… One is that the real sin in life is despair. The acts of sin and manifestations of them – adultery, killing, stealing, all appear to come out of some kind of despair. I-don’t-have-this-and-I-want-this kind of despair. It means a lack of hope and our faith is about hope if nothing else.

That element of hope is the second thing that strikes me… Out of hope grows faith. Imagine the hope of the magi, their faith. They acted on a hunch and look what happened. I would say that they defied conventional wisdom with their bold act.

It all seems a gamble. Don’t despair. Have hope. Follow the hunch. Nurture your faith, live your faith.

The 3 magi come in at about 2:30 of this video, a little corny but thought provoking nonetheless.