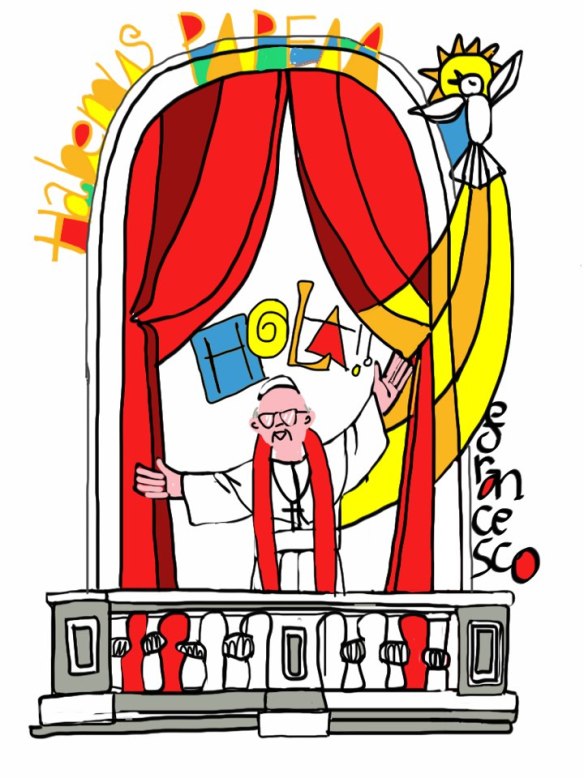 A very special thank you to my dear and beloved friend and artist, Brother Michael O’Neill McGrath OSFS, and Bee Still Studios, for permission to use this copyrighted image here. The blog post may be shared, but please do not reproduce.

It was a crazy day. Once the white smoke came, it was so hard to focus on my work, while we waited for the announcement of who our new pope would be. When I heard the name of Jorge Mario Bergoglio, I had to stop and think about who he was, even if I had already considered him a good candidate in many ways. It was the kind of moment that kind of threw me without hurting me – which is a great metaphor for conversion and for the actions of the Holy Spirit! It was a day of many firsts, it was also the first day of what we hope are many.

There is just so, so, so much information, far too much to take in. That said, as I poke around, I find various nuggets to think and pray about. This one, from La Stampa, for example:

“His favourite priests are those who work in the ‘villas miserias’, the slums of the Argentinean capital. Instead of driving people away with rigid doctrinal preachings, he tries to look at all possible solutions in an attempt to embrace those who are the furthest from the Christian community. The Church, he insists, must show the merciful side of God. “

This is promising for me, his not driving people away with rigid doctrinal preachings. Now I can easily and see and read his stance on some social matters that weigh heavily upon me, but for the moment, I will hold that in hopeful reserve.

As I read the words of various Facebook posters, bloggers, or blog commenters, who want to overly praise, or castigate Pope Francis, in very narrow ways, and so quickly, too. I have seen him judged, because he is no friend of Latin liturgy; he is cheered for being “orthodox.” Whatever that means!  Some are happy that he rides the bus; I admit that I am one of them. Some others are upset because he “hates Liberation Theology,” and wonder why he is not a “third world priest.” To that, I want to reply, “Ummm… Argentina is not Brazil.”

All I can think of is this… it is your first day on your new job and everyone has judged you. Within minutes. *sigh* Yet, it is no surprise that everyone is trying to force him into a particular mold, but in my opinion, this is a man who will not easily (thanks be to God) fit into the simplistic kind of simplistic and ideological labels that are thrown around with such judgment and ease.

My blogging friend David Cruz-Uribe, over at Vox Nova wrote this, which I think is well stated:

“He will not fit easily into the conservative/liberal dichotomy that the secular media (and many Catholic commentators) will want to impose on him.  He is a strong defender of social justice and a harsh critic of the unequal distribution of wealth.  He is conservative on matters of sexual morality and a strong opponent of gay marriage; two years ago he got into a strong dispute with the president of Argentina on adoption by gay couples.  One interesting note:  he launched a blistering attack on priests who refused to baptise children born out of wedlock, calling it hypocritical and clericalist.”

That paragraph says it all for me. I see the great both/and before us, which causes me joy and which causes me angst. Are things like this supposed to be all to my liking? I think not!

Another good post came from the blog, Daily Theology, this particular post written by Amanda Osheim. In particular, I liked this:

Francis identified himself as the Bishop of Rome and accepted the warm welcome of “the diocesan community.”  He also described that community in a particular way, as a bishop and people journeying together.  This calls to mind one of Vatican II’s central metaphors for the church: the People of God on pilgrimage.  Lumen gentium, the council document that describes the church’s life, begins not with the church itself, but rather with the mystery of the triune God. Then, rather than turning immediately to a description of the church’s hierarchy, the council used the metaphor of the People of God to describe how Christ and the Spirit call the church to be one people, each of whom are priest, prophet, and king.  In these three characteristics the People of God receive their shared identity and discover their common mission. Further, a people on pilgrimage are “in process” and thus are marked by hope, trust, and prayer rather than by triumph.  It is only after describing the mystery of God and of God’s whole people that the document proceeds to articulate the particular roles of the church hierarchy.

Daniel Horan, OFM, a Franciscan friar and priest, who writes for America, the Jesuit magazine, said this about a “Jesuit pope with a Franciscan heart,” on his blog, Dating God, including a quote from James Martin, SJ:

First Pope from the Americas, First Jesuit Pope, First Pope “Francis.” I am personally moved by the decision to set the tone of the next papacy after the example of the poverello, the little poor man from Assisi — St. Francis. It has long been my dream that a pope would symbolically select the name of the most popular saint in all of Christian history (after Mary, of course). To see this in my own lifetime is quite startling in a positive way. As Fr. Jim Martin, SJ, wrote on his public Facebook page: “We have a Jesuit pope with a Franciscan name. What a beautiful combination!”

I like that Fr. Dan and Fr. Jim both frame this in such a positive way. As the Jesuits would say, AMDG!

Friend, publisher and collaborator, Deacon James Knipper had some good thoughts on his blog, Teach What You Believe:

Personally, I tend to be a person who focuses not so much what one says, but what one does.  So, there was something that immediately caught my eye today when the Pope was first introduced. As he stepped out onto the loggia balcony of the Basilica overlooking St. Peter’s Square all he was wearing was the papal white cassock and a simple cross…and no other ornamentation.  Did you notice how this contrasted with the robes worn by Benedict XVI when he was first introduced in 2005?

Finally, author of the newly published (and HIGHLY recommended) The Vatican Diaries, John Thavis, who covered the Vatican for 30 years, gave us this on his blog. His point of view, so intimately aware of Vatican doings, speaks volumes for me:

And already there are signs that he will find a new way of being pope. Asking for the people’s prayers for God’s blessing before delivering your own, for example, was a pretty eloquent act of humility.

Within minutes, the Vatican had announced that Pope Francis’ first major audience will be on Saturday, when he meets the more than 5,000 journalists covering his election.

My go-to “saints” for intercession on this matter (and on the matter of my own diocese, where our bishop, Howard J. Hubbard will soon reach retirement age) have been John XXIII, Oscar Romero, and Cardinal Bernadin. I think of them as clerical men of transformation and change. I will continue to pray for their intercession for our new Pope Francis.

Ultimately I have to wonder this; if we are not fixed on transformation and hope, as opposed to holding the ground that suits our own particular desires, what are we doing as Catholic Christians?

There are things about him that I absolutely and thrilled about, and things that worry me… but he is now the Bishop of Rome and our Holy Father. I am grateful and will keep praying, for the integrity of the Body of Christ, which is to pray for the transformation of every heart, for each and every one of us. 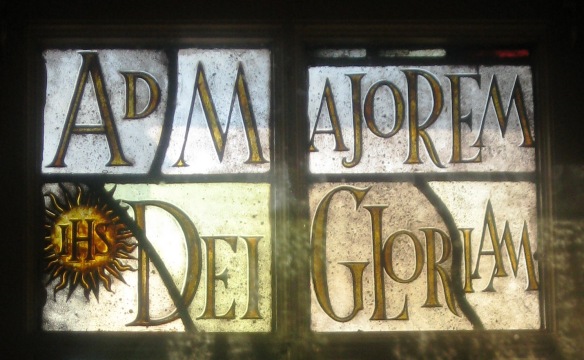 6 thoughts on “Pope Francis – A day of many firsts, a first day of many”