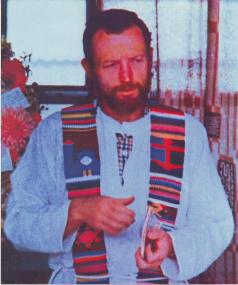 Fr. Stanley Rother was born and raised in a German-American community in Okarche, Oklahoma, but ended up as a missionary priest in Santiago Atitlan, Guatemala. Speaking almost no Spanish, and absolutely no Tz’utujil, the language of the local people, Fr. Stan arrived and immersed himself in his new community. This immersion transformed both him and those he served with love. Padre A’plas, meaning Padre Francis, as he became known, worked together under many difficult circumstances in the pursuit of justice and dignity.

On this day in 1981, he was martyred – shot in his own residence. While I had heard of Fr. Rother before (I know a priest who was in seminary with him),  I was not very familiar with his life and witness. Recently I had the privilege of reading an unpublished galley of biography of Fr. Rother. That book, The Shepherd Who Didn’t Run by Maria Ruiz Scaperlanda, will be published in September by Our Sunday Visitor. Fr. Rother has been declared a Servant of God and his canonization cause will continue. You can pre-order a copy here.

This largely unknown man turned his life over for others in ways that I can’t begin to describe to you. A few things strike me about his story… that it took awhile for him to find his stride in both life and vocation (read the book!), that he ended up in a town named Santiago (my upcoming camino), and that he was known as Padre Francis (his middle name, but also our pope’s name). Just a few little points that draw me into his story more deeply and offer food for thought and prayer.

Please think of Padre A’plas today and say a prayer, if you are a praying person. Remember the ways in which we are called to serve, and that the road to such a life is not a clearly marked path, but more of a pilgrimage. Such a journey means getting lost, discouraged, starting up again, and keeping moving even when you don’t want to. It is a road that is not always understood, but one that must be pursued, no matter the cost.

Here is a video about Fr. Rother’s death, a trailer for a documentary.