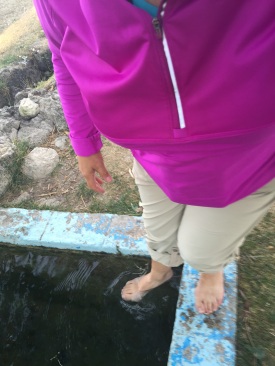 They were sometimes like a hot knife plunged into my lower extremities, at other times, simply walking on broken glass. My blisters during the first two weeks of my Camino were horrible. One day, Sue and I entered the town of Villafranca Montes de Oca and I simply had to stop walking. It was too much, I could not take the pain. What happened next is a long story for another day, just let it suffice to say, my feet were wrecked. Would I be able to continue my Camino? (Spoiler alert for new readers, thanks be to God, I did.)

With nearly every blistered step I took, I was aware of how privileged I was to even be in this situation. All I could think about when my feet, my knees, or general tiredness bothered me was that I chose to be where I was. Not so far away from me, migrants were to be found all over Europe. The vast majority of them fled their homes, not by choice, not due to any luxury, but due to violence, hunger, the threat of war, and the ever-present reality of death. I tried to pray with and for them with every painful footfall, even after my blisters were overall healed.

Today is “A Day Without Immigrants” here in the US. Here is some of what the link says:

The campaign, spread on social media and messaging apps, has called for a “day without immigrants.” It asks foreign-born people nationwide, regardless of legal status, not to go to work or go shopping in a demonstration of the importance of their labor and consumer spending to the United States’ economy.

I am going to work, but I remain in solidarity with our brothers and sisters from other lands.

My position does not mean that I think we should just open the borders without regulation. There’s a problem in our social media world, found along the spectrum of fake news, hyperbolic expressions of hyperbole. Thus, many of us might be led to believe that at any given moment a flood of humanity is pouring over our southern border, but studies show that there have been declines.  I know, I know – there are numbers to show everything.

Many say, that we just can’t sustain the number of people who are leeching our resources. I’m not so quick to go that way, especially when leeching of resources can often come from the top end of society – but hey, that’s another post for another day.

Of course, there are the many people who come here and work hard, harder than Americans in some cases, typically doing jobs that no one else would do. And for less money than most would accept. If we wholesale started mass deportations, certain sectors of the economy would collapse. (Not that that makes low wages and terrible conditions OK for undocumented workers.) This is why we are marking today as a #

“Migration today is not a phenomenon limited to some areas of the planet. It affects all continents and is growing into a tragic situation of global proportions. Not only does this concern those looking for dignified work or better living conditions, but also men and women, the elderly and children, who are forced to leave their homes in the hope of finding safety, peace and security.”-Pope Francis World Day of Migrants and Immigrants 2017

So where does this leave us? Perhaps as a nation, we could begin to have conversations that did not begin with did not begin and end with fear. And for those of us who profess to follow Christ, that is even more pressing.

If you support immigrant justice today, keep doing whatever it is you are doing. If you are challenged by the situation, here are some thoughts. In fact these thoughts are helpful to all of us, no matter what our opinion or belief!

All I know is that when I had to walk across a country, it was due to the privilege of choice. And when I had that great privilege, all I could think of was those who did it without any of the comfort or choice that was given to me. My prayers were, and remain, focused on them.

There is a great deal to consider, but sharing our basic humanity is a good start. What else can we do? There are only so many walls and borders to fortify, but the ones in our hearts are the starting place for justice, mercy, and love. Which will we choose?

2 thoughts on “Blisters of privilege, prayers of choice”