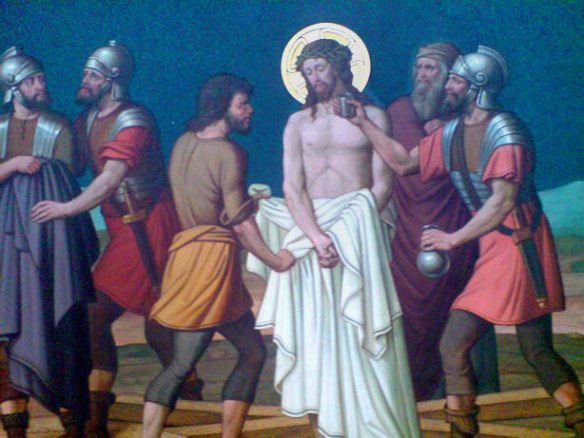 When the soldiers had crucified Jesus, they took his clothes and divided them into four shares, a share for each soldier. They also took his tunic, but the tunic was seamless, woven in one piece from the top down.
– John 19:23

Of all the many things dividing the Church these days, it boggles the mind to imagine that disagreement over when it is appropriate to kill someone would be the thing to do it. And that it would be a fight from a seemingly more-ardent self-proclaimed “pro-life” right that led the way… the way to saying that we should indeed preserve the right to, well – kill someone.

Although it is probably not the best use of my time, and even less favorable for my blood pressure, I often find my way around various pathways of Twitter where different factions of Catholics have their say. Frankly, I find all the partisan fracturing in the Church nothing short of heartbreak, because Jesus clearly expressed God’s will that all might be one. We are not very good at that, and I am well reminded that the real source of evil’s work is that of division, fracturing you might say.

The whole thing brings to mind the idea a “consistent ethic of life” that was noted in a 1983 speech at Fordham University by Cardinal Joseph Bernadin, now of blessed memory.  Cardinal Bernadin’s speech was meant to discuss the then new bishop’s pastoral letter, “The Challenge of Peace: God’s Promise and Our Response.”  This particular sentence from the second paragraph of that letter truly strikes me:

“Faith does not insulate us from the daily challenges of life but intensifies our desire to address them precisely in light of the gospel which has come to us in the person of the risen Christ.”

So here we are, not insulated from challenge, but invited by Christ to an intensified and deepened desire to address issues around us in the light of the gospel. You know – the hard stuff. Really hard stuff.

Enter Pope Francis with a revision to the Catechism of the Catholic Church. You would think that he had opened the gates of hell if you only saw certain Twitter accounts or websites. (That’s another post for another – living in our bubbles, something I try not to do, although I know some will accuse me of it. If I did that, would I have seen the things I am discussing? OK, let us move on.) Anyway, if you want to read the newly revised change, you can see it here.

Ironically, the change builds upon a foundation laid down first by Saint John Paul II, and by Pope Emeritus Benedict. That is all there in the “see it here” link above, easy enough to read and comprehend. It is not like Pope Francis went off the rails and starting making things up, although certain corners of the Catholic world are behaving this way, now that he has made this revision. It has a lot to do with context and more, and there are way better resources than this if you want to read about that.  Here is one.

It is all very tragic to me, an expansion of the “Gospel of Life” results in a complete and utter breakdown in some corners of the Church. I’m witnessing some bizarre “I’m-more-pro-life-than-you” slugfests on Twitter, some really insulting commentary about Pope Francis and so-called “liberal Catholics” and “homosexual elements and networks” in the priesthood. Then there is the entire sedavacantist (really dislike that link, but better than most… *sigh*) trope, and the anti-Christ and anti-modernism cry and hue that follows. Good grief, God help us now. Please.

Ultimately, and I am not going into a detailed discussion of the Catechism change, but I will say that it has everything to do with timing, context, and history. That of course requires reading, thought, prayer, and nuance. Please Lord, grant this wisdom unto your people. What I am saying is that following Jesus is really hard, that is why it is about carrying your cross and surrendering. It doesn’t mean we do not struggle, but it does not mean that we must turn to Anne Lamott for wisdom every time any pope says or does something we do not personally like or wish to agree with.

In the end I find it all very sad and depressing, and I pray ever more for the unity of all in Christ, and for the integrity of the seamless garment of life. As with Christ at his crucifixion, that garment is shredded today.  And as with the crucifixion, I see what happens when power runs amok, when someone can “convict” another and take their life in the name of “justice.” So often when the power to take the life of another in the name of some kind of justice is invoked, it is simply so that in yet another way, we can we are God. And that, we never are.