Hi! Worst blogger ever has returned for a brief moment. Time is not on my side when it comes to writing right now. In fact, I should be outside right now, but here I am in the non-walking position, and that means I am writing!

Five weeks from today I will – well, God willing as we say around here – will head north to Montreal. From there, Sue and I will get on a plane and fly to Paris. Camino Santiago, here we come! Yet, five weeks seems both an incredibly long time, and an incredibly short time. Long in the sense that I have a lot of training in front of me, and short in the sense that I have so much to do before I leave. Every day I am faced with the need to walk the walk. Talk is cheap, walk – not so much. I simply have to keep on walking.

There are many things I would love to write about, like the mass readings. In today’s Gospel we hear for the zillionth time that we need to be forgiving. Talk really is cheap, isn’t it? Last night I dreamed of an old friend, a person that I find it nearly impossible to forgive. Old childhood wounds and disappointments remain tender, more recent challenges burn white hot at times, erupting and taking me by surprise. Last night she crossed my mind as I was cleaning up after dinner, and she turns up in my dream. Wow God you are persistent, aren’t you?

In the dream we were both tentative and amicable, until Hillary Clinton showed up. Was she with us? Or on TV or a device? Oh wispy dreams, I cannot grasp your tendrils and remember. Anyway, there she was and before anything could erupt, my old friend said that we could not discuss politics. I felt total relief, instead of my typical urge to pick at the wound of disagreement. Then I awakened! Poof, dream over. Five minutes later I am drowsy and reading the Gospel about forgiveness. Talk is so cheap, ridiculously so and yest even at that price I can’t even talk theoretical forgiveness with this friend. What about walking? Can I walk forgiveness? It seems hardly possible.

Jesus tells us we must forgive in this way:

“I say to you, not seven times but seventy-seven times.”

And I can barely keep count of reps when I exercise, or even laps around my neighborhood – how do I do this?

How many miles must I END_OF_DOCUMENT_TOKEN_TO_BE_REPLACED 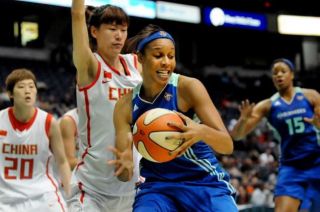 Last night, Mark, Erica and I went to see the New York Liberty play the Chinese National Women’s Basketball team (no great link available) at a WNBA exhibition game at the Times Union Center here in Albany. We have seen The Conneticut Sun play at Mohegan Sun before; we like women’s basketball games.

I was struck by something as I watched the game and took note of a group of girls who sat behind the basket and cheered the game with tremendous enthusism. As a 53, almost 54 year old woman, the scene before me was something that I would have never seen as a child.

In say, 1970, when I was 13, there was no such thing as a professional women’s basketball league. Women? Professional sports? Tennis, gymnastics, swimming, figure skating were around, but not baseball, basketball, etc. Yes of course, we have all seen A League of Their Own, but that was a moment in time. An important moment and one that would have impact later, but not just yet.

In any event, I wanted to be a hockey player when I was a kid. Today I have friends who play women’s ice hockey, but at that time, I kept my dirty little pucked up secret to myself. I went skating as often as I could and each time I laced up my white figure skates, I longed for black hockey skates, a helmet and a stick. The strong desire of it – almost sexual in nature, it was that potent – would make me blush to myself and I would stuff it down as I headed off to skate nicely in circles with the other girls.

Then there was the matter of the racial integration, a matter that was (and sadly still is in many ways) working itself out in the 60’s and early 70’s. To see the NY Liberty, women, both black and white was very moving to me.

Let’s add the third thing in – playing the Chinese national team. I recall Nixon’s trip to China in 1972… It was a big deal, but when I was 10, 11, 12, 13… none of this had happened yet. China was still a monster of a country, “communists!” We had to almost hiss that word out between our teeth, lest it sound like something we might want to become. Considering the communist threat was like seeing a swarm of ants about to overtake that piece of potato chip that fell to the ground at the picnic.  Watch out! They will consume!

So here I was, watching an event that simply could not have taken place when I was a girl.  This made looking over at the 12 year old girls who are members of the AAU basketball team, Lady Dreams. all the richer.

The kids were so excited and really seemed to enjoy every minute of the game. And a fine game it was, although at the start, NY seemed a bit slow and the Chinese so nimble. The Chinese women did not look muscular or toned, but they were fast, agile and made great shots. Come the second half however, and wow did things change. The Liberty took off and ended up winning 79-65.

If you have never seen a WNBA game, I do recommend one. Even if you are not a basketball fan, I can’t tell you what a joy it is to watch these women on the court. They are there with passion and I say that both in general and with specificity to each particular game. I am also keenly aware that this appears to be a truly team sport… one does not see individual superstars but the efforts of a group of women with a common goal. It is fantastic and a fresh breeze in the culture of individual mega-stars of sports and otherwise.

Today, Mark McGuire of the Times Union wrote a fine piece about last night’s event. It was entitled, Those in the stands the real story. I was sad – and was aware of it last night, that there was little press coverage. Mark (my husband) noticed Mark (the journalist) because he knows him professionally. There was a photographer from my Mark’s TV station. It was clear that this was not a big event.

(I took this with my phone; we were in the first row, not far from the NY Liberty bench.)

Yet, it was a big event for those of us who were there. The cheering was evident and the excitement of the crowd, including and most especially, the kids of the Lady Dreams.

Another fine moment was watching a little girl, all the way on the other side of the arena, dance with wild abandon, as well as real talent, during half-time. She just got her tiny self into the aisle and when the music played, she moved. Such joy, such life! That is liberty, isn’t it?

So what is the point of all this? In my own slow-moving and long winded way I am writing about liberty, dreams and hope.

In 1970 none of what I watched in 2011 would have been possible, yet here I was enjoying it all. It reminded me that there is no worse enemy than my own discouragement.

Pay attention, (you knew that there had to be a religious point in here somewhere, right?) signs of the resurrection are everywhere. Even at the TU Center when the NY Liberty plays China.