Others living up to expectations… right now that seems impossible for so many.

The news about L’Arche and Jean Vanier shocked so many of us. Yet another hero fallen, the great man has done terrible things. If you have no idea what I am talking about, please see this link.

At first – after the shock, after feeling ill about it, I started to realize that maybe I was not shocked at all. Sometimes I think that my ability to be shocked is long gone. Having grown up in a family of abuse, having gone through quite a long and ultimately healing journey of life, I have a very distinct and perhaps quite different point of view. Long ago I had to make some peace that it is entirely possible that the most beloved humans in your life may also be the most broken ones. As a result, they may end up working to break you, intentionally or not. How do you make any sense of that? I cannot give you a map, I can only tell you that it is so hard to hold it all, but it can be possible.

How my heart aches for women who were manipulated by Vanier and then had to hear a steady stream of how great he was. I cannot imagine how any of them must have felt. What a mess and what an abuse of power.

When I read this particular news, after gut punch beyond gut punch of such news, I began to think…  what is God trying to say to us?  Beyond that I started to wonder about what is being gestated in the Spirit? And what is trying to be born? Here we are at the gateway to another Lenten season and the question screams out at me – what will die, what needs to die? Things do need to die during Lent, so that thing can be born. What is trying to be born? What do want from new life? And how will we live our resurrection?

That is where I begin my Lent, with the reminder that another hero takes another fall. As this was happening we also got news that the sainthood cause of Rutilio Grande SJ as Pope Francis declared him a martyr. Normally I would be cheering about this, but today I am not of that mind. I have long loved and admired his work and memory, but right now I feel anxious about priests, about men being declared saints. At least for the moment until we can come to some realistic place about what sin is and what grace is and what healing is. And until we can some to some place where truth is told and reparations are made in meaningful ways. I am not supposing that anyone else has abused anyone, but I am exhausted by learning dark truths that were buried in falsehoods, in woven tales, and in lies. Maybe we just need a moratorium, even for those we love and cherish, we need some time.

Honestly, I feel as if I enter Lent stunned by so much information, and I enter Lent craving silence, space, stillness, and peace. And I enter Lent without much chance to get large doses of any of those things. So it goes, I will carve out the small places and spaces of solitude needed.

How do you enter Lent? Who has fallen in your life? What has died? What needs to die? Whatever it is, may your days be blessed. I will try to do some writing, but as you know things have been spotty of late. We will see what God has in store for us. Onward, onward we go – fallen heroes and all.

I’m back… yes, more #metoo is on my mind. Rather than saying part 1 or part 2, let’s just skip ahead and say part infinity. It kind of goes on forever.

Today the internet is lit up with the news that actor Dustin Hoffman sexually harassed an intern in 1985. There has been a great deal of surprise about this, including my own for about a second.

Honestly, I am talking to myself as much as I am talking to others as I say this… I think we should stop being surprised at learning some other person of note has committed some form of sexual harassment because it is so systemic.

Think about it, women were essentially chattel for a great deal of history, and remain so in many ways and places. A big part of the white nationalism movement goes beyond issues of race, color, ethnicity, and also seeks to return to a time when women knew their place. Zoom out – it is part of something much more significant, and we are all involved in it. This is why it is still a challenge for many women, let alone men, to use the term feminist. I myself avoided it for a long time, and it was not because I saw myself as some little lady.

As someone who is often seen as too demanding, too loud, too outspoken, too angry, too emotional, too strong willed, such a bitch and more, I have to always work to be self-aware. Am I being one or more of those things? Or is what I am doing just what I should be doing as a human being in the world. Let me tell you, far too often I rise up only to be cowed into some kind of shame that I am “too_____” (fill in the blank). For so much of my life I have just owned that too quickly, letting others off the hook. 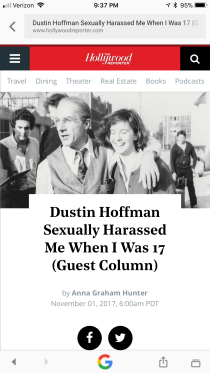 Sexual abuse, rape, assault – these are crimes of power. Dustin Hoffman would not have said “I’ll have a hard-boiled egg … and a soft-boiled cl*toris.” to an intern if he did not think he could get away with it. Worse yet, it probably wasn’t even thought out – simply a reflex given his position. That this was done in front of an entourage, and of course they all laughed hysterically only adds to the abuse.

One of the worst #metoo experiences I have is about a man who simply used the most disgusting descriptions of sexual acts as he tugged and pulled on a bottle of wine that he was trying to uncork at a company function. Some of our coworkers were no more than ten feet away. In a low voice he questioned what I might like to do or experience in terms of his struggle with the wine bottle using the most vile and explicit language.  Honestly, I was in one of the most senior management positions, higher than this man, but I was so shocked that I stood stock still. I do not think a single muscle moved in my body. Did I breathe? I don’t think I did that either. Honestly, I felt terrified although I knew then, as I knew now that this man would never lay a hand on me. Yet this language and these descriptions of what he imagined I might enjoy threw me. And as suddenly as it started, it was over. The wine was corked, he stood up (he had been a little hunched over) and smiled and walked away. I wanted to faint.

One of my first thoughts was “did I hear him correctly?” Of course, the reflex of many women is self-recrimination and blame. “Was I wrong?” was a nearly unconscious reaction. I turned to look at the rest of the room, people were filling up the place after an event. I felt as if I were out of time or in a dream sequence. On one side of the room I saw one of my employees, a woman. She was pretty wild and had had a lot to drink; I remember that I worried she would do something foolish. (She did… that is another story, file under #himtoo. It happens.) Anyway, I could not deal with any of it, so I quietly left and was about to walk back to my room. A friend came along and asked why I was leaving, so I told her. She couldn’t believe it but neither she – nor I – would have thought about reporting it.

The man was someone I had known for about 16 years give or take. He was not someone I would have imagined would do such a thing. He was drunk, and that was not entirely unusual for him or others at this function. It seemed to me that I sort of knew he was having some marital issues, but maybe that’s just because I now know that in reverse. But you see, in some way I was trying to get him off the hook.

Well a funny thing happened on the way to the HR department. As I noted, there was a #himtoo story having to do with my female employee and I was working with my HR person on that. She was a great employee, but also drank a lot and she was a very wild child in those days. We’ve lost touch, but I think she calmed down. Anyway, as I was casually speaking to the HR person, who was a friend, I mentioned what had happened to me that same night.

Well, guess what? She was kind of a mandated reporter. Just knowing about it casually meant she had to investigate it. I was horrified – and ashamed. One, I started to wonder if I had misheard him. Two, I felt ashamed because I just felt ashamed. Three, I did not want this to become a thing. (And we wonder why rapes are not reported?) Too late – things were going down.

Let us just say that of all the possible endings, it worked out well instead of truly awful. I can say this, I was in receipt of what I believe was an almost immediate and sincere apology from the other end. No serious actions were taken, and frankly, I think he was shaken to his bones over this. I did mention to him that he was a manager of young women and that he needed to be aware of his actions. Today I’m pretty glad I actually said that, regardless of how it might have turned out. I have no idea where he is today and while I do not wish ill upon him, I do not need to know.

Most of the stories do not turn out this way. Most of the stories leave us feeling angry, ashamed, or worse. I still have a number of those. But you know what, if nothing else, #metoo reminds me it is actually #ustoo. None of us are alone in this. And the fact that it is pouring out like water overflowing a dam is a good thing.

Expect more stories, don’t be surprised. It is not an excuse but the entire machine was set up this way. That goes a short distance to explain what most men should have known better about, but who consciously chose otherwise.

Here is a song to remind all of us who have been indeed – silent all these years. It makes me feel strong, but I also cry every time I hear it.