The cries of “Santo Subito!” (Sainthood now!) have been heard from the moment that Bl. John Paul II died in April of 2005. Now it appears, things may be moving forward, with a possible canonization on December 8, 2013. Typically, there is a five year wait before any work towards the beatification and ultimate canonization occurs, but Bl. John Paul II was put on a fast track, despite what was said, was his desire to the contrary. Others may also cry out, “Santo Lentamente!” (Sainthood slowly!)

As you might imagine, many people are thrilled beyond belief, and believe that this has already taken too long. Yet, there are others who are more skeptical. 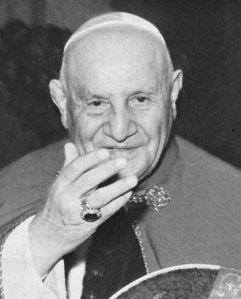 It looks like there is a chance that Bl. John XXIII could be canonized the same day, bringing joy to some, and horror to others.

Allow me to offer this observation… By canonizing both of them on the same day, the desire to assuage divisions between those who love either one or the other of these former popes may be met. Or not. Perhaps it will further inflame the divide.That there should be a divide is a very sad thing, but for many there is.

What do you think? Is there a divide? Or are we, as we are called to be, One in Christ? That’s the tricky part, isn’t it? And that in general, may be the best wisdom discerned from subito or lentamente; fast may be satisfying, but slow may make more sense – at least in situations, if not in sainthood.