On May 31, 2000 something remarkable happened on television, all due to a replacement series that debuted that night. This television program turned the tide of “reality television” and has had a profound influence upon this country. In fact, perhaps more profound than we realize! The show is “Survivor on CBS.

Before I get too far allow me to say that I have never watched an entire episode this program. It never ever appealed to me, and when I learned more about it from obsessed friends, I felt nothing but revulsion. The idea that people would go against one another and vote people “off” the island, “outwitting” others so that one person wins a million dollars is – sorry people – abhorrent to me. Rome before the fall is what I thought then, Rome before the fall is what I feel now. Yeah, yeah, yeah – I sound like a snob, an elitist, a snowflake, go ahead. That’s fine by me. You may say that “It’s just a show, just a game” Watch the promo materials – it is called the “greatest social experiment” for a reason.
“Outwit, outplay, outlast” is the motto. Have fun all alone with your cool million you outwitter, outplayer, you outlaster you! 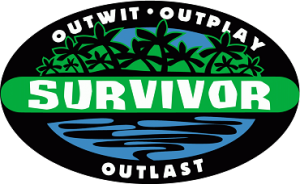 Tonight I did begin to watch an episode of the show because I have been wanting to write about it. I’m not going to lie, I’m about 5 minutes into season 30, episode 1 and I can barely stomach it. Sorry Survivor fans. This has been my impression all along, now that I am seeing it – I hate that it is proving me right. I’ll try to keep going, but the motif is clear enough, and I can work with that. Let me share this example, a description of this season that I found here:

Perhaps you can begin to see what is so timely about all of this.

So what led me to all of this? Well – two things got the ball rolling. One was this podcast from Fresh Air, in which host Terry Gross interviews Maggie Haberman of the New York Times. Haberman has covered Donald Trump for the NYT for some time, and previously for multiple publications. The second thing that caught my attention was the printed text of this AP interview with the President that was recently published.

The final element was something that happened as I sat in a doctor’s waiting room. A man was talking to his wife about his pain, but then he began to speak of gratitude for how things could be so much worse. He was loud and it was a small waiting room, so I could not help but hear him over the din of CNN on the TV. His passion about gratitude had me near tears, I would not have expected that kind of talk from a man like this – older, larger, roughhewn. Then it happened, he glanced up at the TV, where Sean Spicer was going on about something, and the man went on a major rant about the liars, liberals, and losers that make up the media, and how they were hellbent on destroying President Trump.

Humans are complex, I thought, no – maybe complicated. Maybe both. Anyway, I could not muster anger for him. Yet I knew that he and I saw the world through a shared lens of gratitude, but a cracked lens of politics. As I sat in the exam room moments later, waiting for the doctor, somehow Survivor – for reasons I cannot explain – popped into my head.

Anyway, this is not a takedown of the president, I promise you it is not. It is an analysis of the current situation in the context of faith, culture, and politics. Who are we as a people? How did we get here?

This is too much information to go into very deeply so I will say this, and then urge you to find what it takes to watch at least one episode of Survivor if you have never seen it before. I picked the one that I did because it pitted white collar people versus blue collar people versus “no collar” people. (More free spirited.) SPOILER: A blue collar wins. NOT SPOILER: ust know that you will learn a lot about our country and our culture, just by watching the people introduce themselves.

Briefly, the Maggie Haberman interview on Fresh Air struck me because of the haunted description of Donald Trump.  A man who prefers to sleep in his own bed. Nothing wrong with that, but an oddity if you are the leader of the free world. And his isolation, gathering a cadre of people around him who are… well, they are who they are. Haberman’s take on Bannon staying or going was fascinating. You’ll need to listen to find out. It is just so much intrigue.

Make no mistake, all power centers are rife with intrigue! However, a leader of Trump’s personality and style bring us to levels of intrigue not seen before. Somehow that ol’ Bush White House with Cheney and Rove seems fairly benign to me. Anyway, it is a fascinating podcast full of things I knew, and many that I had not thought of.

The AP interview struck me as primarily sad. Then it terrified me. I’m sad because our president simply cannot get through too many sentences without reminding everyone how great and successful he is. So much hubris, but what also appears to be so much insecurity. Whether President Trump is successful or not… I mean, if he is, then we do not need to be reminded on a constant basis. It is unseemly at best.  In the interview, of course he had to emphasize, even if it were true, that Obama got “zippo, zero” and yet Trump got the worker released from Egypt posthaste. I am glad that she is released, but gosh – does it all have to be about Trump? And then there is so much that is either awkward or unclear. Like when he is speaking, I find myself saying out loud to no one, “What is he on about now?”

Anyway, read it for yourself.

Finally – at it’s heart, Survivor is a completely set up “reality” program. As I watched the open for the episode, I saw how slick it was. I’m not surprised – after all, they have had 17 years to perfect it. And I am sad to say that our president, who is used to adulation via his businesses and via his own “reality” show is remarkably similar. I will say this, Survivor is better produced, more slick.

But isn’t it a kind of populist Trumpian dream that we “vote” off the losers so that we can end up with our own prosperous million? That we can have what we want, not sharing it at all? Let’s get all those “fill-in-the-blank” others out of here, and THEN we will be great. What if, what if. What about now? What about human dignity? What about life? What about a strong sense of the common good? I for one am sick to death of hearing about trickle down, as I have since the Reagan era… It is a reminder that others outwit, outplay, and outlast, so the fault with those on the bottom rungs must be their own.

As a Catholic I am also considering the theological implications of living the Eucharist and the kind of mindset that brings us Survivor and the current political situation. Sadly, many of us were catechized to believe that we somehow “earned” the right to the banquet of the Eucharistic table, and that we must “work” for it, and that we “take” communion, or “receive” communion. None of which is true. You cannot outwit, outlast, or outplay your community. Why would you want to? In its greatest sense, the best Eucharistic theology makes it clear that everyone needs to be at table. The Eucharist heals, binds, and propels – it is not the million dollar reward for driving everyone away.

This piece grows long, and I grow tired. At this point, I have merely skittered across the surface of some ideas. I will close this way – remember that a country hooked on “outplay, outwit, and outlast” gets the leadership it deserves. THAT is not a Trump problem, that is our problem and it seems the current president might fit nicely into the model.

What have we done to create this? What can we do to move forward? Me, I’m still wishing I could have had a conversation with the man in the waiting room who was one part graciously and humbly grateful and one part ranting and raving. Mostly I would have asked him questions starting with why. It could have been interesting, what I learned from him, and what he learned from me. If anything. We will never know.

At this point, I am not happy about life in the United States of Survivor, but it seems that is exactly where we are.

What do you think?

This old edited weirdly lit 🔥 (lol) photo of Mark and me from his birthday in 2011 made me smile today. We don’t look exactly the same, well he does, but we’re still goofballin it along with gratitude and joy. #memories #love #oldpic #silly
Notre Dame Cathedral, Paris, France, September 16, 2016. I was on the way to The Way, with The Way. #memories #caminodesantiago #paris #notredame #camino #theway #pilgrimage #peregrina
Thankful as I begin this week… I had an amazing time at @pyramidlifecenter as usual. I saw old friends, I met new ones, I let him of some $h!t, I opened my heart, I challenged a fear. Thank you @marydtp518 & our ever-growing tribe. Thank you @brian.p.evers & crew, you do amazing work! #retreat #adks #peace #beauty #stillpoint #mountains #silence #nature #creation #amdg
The phone was in a ziplock, thus blurry. I was in the kayak. The retreat was extraordinary. #pyramidlifecenter #adks #retreat #lake #kayaking #godiseverywhere #amdg
Soon, very soon - I will be in a vey special place. If you need or want me to pray for you while I’m on retreat, message me or comment. Please pray for me, @marydtp518 who will lead us, and all on this journey. #retreat #pyramidlifecenter #adks #upstateny #prayer #peace #silence
Unfiltered hydrangea development! Blue with lavender accent! #garden #hyrangea #flowers #nature #beauty #amdg