Today I offer many prayers for our Jewish brothers and sisters around the world as they fast and pray on Yom Kippur.  For the past 10 days they have been praying and reflecting through the Days of Awe and now the holiest day is here. There is a fast that began last night, the Kol Nidre service ushered in this solemn moment.

Fasting, prayer, and repentance are intended to draw anyone who seeks God into the reality of life. It helps us to recognize our sin and confess, and God willing, be transformed. On this particular day, our Jewish brothers and sisters pray fervently to be sealed for another year in the Book of Life.

Such hope and desire is something for all of us, no matter how we seek it. Today may we all pray for such renewal and change so that we might bring good to the world. G’mar Chativah Tovah!

Having just read a post about food, fasting, and mean abstinence over at Catholic Sensibility, I was reminded of this post. In fact I quoted a portion of it in a comment over there. This essay was posted on this blog in October 2012, but it was originally published early in Lent in 2008,  at The Parish Blog of St. Edward the Confessor. How I wish that I could tell you that I wrote this essay, but I did not. A friend wrote it, and he wished to remain anonymous when it was first published. I honor that anonymity once again as I repost the thought provoking essay here today.

One thing that is on my mind is this… Many of us fast from meat and eat fish on Fridays during Lent. But is eating fish really eating simply these days? Honestly, I must admit to having eaten ahi tuna this past Friday; it was hardly a sacrifice. How can we approach the Lenten fast with a sense of solidarity with the poor? What about Lent with an inclination to reveal our own inner poverty? This post continues to give us a lot to think and pray about. Fasting does not have to mean food alone, although it helps to connect eating small simple meals and sharing what we don’t eat or spend with others in some way. But there are many ways to open space for God.  Ultimately we must discern, what is God asking of us through our sacrifice and our fast? Read our guest post today, our guest re-post, I should say and see what touches you. 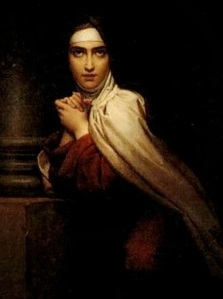 How can the simple, everyday task of eating become an act of compassion?
One of my favorite saints is Teresa of Avila. She was a typical teenager – she loved boys, clothes, flirting and rebelling. When she was 16, her father sent her to a convent because he thought she was out of control. At first she hated it but she grew to like it due to her growing love of God and the fact that the convent was less strict than her father.

When the time came for her to make a decision between marriage or the convent, Teresa had a difficult time choosing one over the other. She had watched a difficult marriage destroy her mother. On the other hand, being a nun didn’t seem like much fun. Religious life won out, according to Teresa, because it seemed the better place for one “so prone to sin.”

What I appreciate about Teresa is her sense of humor and how her religious sensibilities helped her find peace and meaning as she focused on and became reliant on God’s tender and merciful love. She had the ability to seize the moment and live it to the full. Never one to allow sin, gloom and despair to END_OF_DOCUMENT_TOKEN_TO_BE_REPLACED