During times like these, I cannot help but think of Bl. Oscar Romero, the Salvadoran archbishop gunned down as he celebrated the Eucharist. Romero will be formally recognized as a saint on October 14, 2018. A tweet from Tobias Winright, Ph.D. prompted me to look for this particular scene from the film Romero, starring Raul Julia as the Salvadoran archbishop gunned down while celebrating the Eucharist. (I will add that you will see a representation of assassination in the video, be advised.)

In his last passionate homily on March 23, 1980 Romero said:

“I would like to make an appeal in a special way to the men of the army, to the police, to those in the barracks. Brothers, you are part of our own people. You kill your own campesino brothers and sisters. And before an order to kill that a man may give, the law of God must prevail that says: Thou shalt not kill! No soldier is obliged to obey an order against the law of God. No one has to fulfill an immoral law. It is time to recover your consciences and to obey your consciences rather than the orders of sin. The church, defender of the rights of God, of the law of God, of human dignity, the dignity of the person, cannot remain silent before such abomination. We want the government to take seriously that reforms are worth nothing when they come about stained with so much blood. In the name of God, and in the name of this suffering people whose laments rise to heaven each day more tumultuously, I beg you, I ask you, I order you in the name of God: Stop the repression!”

On March 24, 1980 he was gunned down as he consecrated the Eucharist.

We cannot remain silent before abomination, and we must at some point choose to follow God before all else. We must also, if we heard today’s Gospel, choose to love our enemies. Romero fought for justice, with hope for peace – which would include loving those very enemies that we fight. May the Blessed Romero intercede for us as we discern and make our choices for present justice and future hope. We cannot wonder who the next Romero is, we must be our own next Romero, whatever the cost. 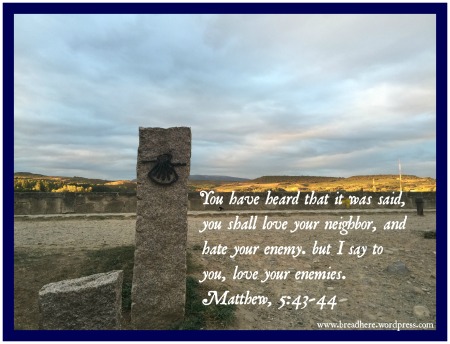 I’m enjoying being off of Facebook for Lent, and spending my time on Instagram with one post per day; a photo and a mini-reflection. You will have to head over to my Instagram feed, or to my Facebook page (where my Instagram auto posts) to read my reflection for today. Essentially, I am thinking about Jesus instructing us to love our enemies.

I’ll gladly take a long walk with a heavy cross on my back than to do this. Yet, I try to constantly push myself to do so. I suck at it, by the way. Big time.

It occurs to me that part of the problem is my own lack of willingness to look at the enemy within. Of course I am well aware of that enemy, but my inner looking often results in things like my own defensiveness about myself, my shame, and my superhuman strength at avoiding and denial. I’m great at that stuff. Big time.

All of this is an invitation to me, a good deal of which is more clear this Lent because I am spending less time “talking” via Facebook. Painful is my awareness this Lent that the driest and most arid desert is often found deep within my own heart. Thus, the gifts of death and new life are made clear, but only if I am willing to keep going.

What does your inner search Please be assured of my prayers as we ply our way through deserts of our own making. God offers us so much more, but even for those of us who say we will follow, do we really? 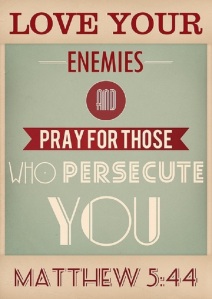 From the Gospel today, and continuing into tomorrow…

“You have heard that it was said,‘An eye for an eye and a tooth for a tooth.’But I say to you, offer no resistance to one who is evil. When someone strikes you on (your) right cheek, turn the other one to him as well. If anyone wants to go to law with you over your tunic, hand him your cloak as well. Should anyone press you into service for one mile, go with him for two miles.Give to the one who asks of you, and do not turn your back on one who wants to borrow.

“You have heard that it was said, ‘You shall love your neighbor and hate your enemy.’But I say to you, love your enemies, and pray for those who persecute you, that you may be children of your heavenly Father, for he makes his sun rise on the bad and the good, and causes rain to fall on the just and the unjust. For if you love those who love you, what recompense will you have? Do not the tax collectors do the same? And if you greet your brothers only, what is unusual about that? Do not the pagans do the same? So be perfect, just as your heavenly Father is perfect.”

Your hatred is not the problem, OUR hatred is.

How are we doing? Do we justify our own hate?

This Sunday we hear about Abraham and Isaac in the first reading from Genesis. (Readings here.) This is a really tough one, even though we know the outcome.

By contrast, today, on Saturday, we hear about obedience, following God’s laws, statutes, and commands. (Readings here.) Today’s Gospel is very clear, we are compelled to love our enemies.

Sacrifice our children and love our enemies. No wonder we are challenged by our faith. How can we make sense of any of this? It is thoroughly confusing and confounding. Yet here we are, trying to make sense of it. We see that Isaac is spared, but we know that Jesus is not. As a result of Jesus not being spared, we are free. Given this, is END_OF_DOCUMENT_TOKEN_TO_BE_REPLACED

I love this - a wild geranium I think. It’s in the woods. It was super hot, but I got my 5 miles in. #walking #goals #woods #nature #beauty #flowers
It smells amazing. Can’t wait to dig in, but it has to cool a little. #bread #baking #kingarthurflour #joy
Cacophony of color, the sound and symphony of my garden. It makes me so happy. Depression and acedia had me in its grip more more tightly than I realized , but this spring I have planted more things than I have in ages. That said, a field left fallow is important for future growth. #color #flowers #garden #spring #acedia #fallow #growth #transformation
It is not dark yet, but we fired up the fire! 🔥 S’mores about to happen. ( I don’t eat s’mores - yuck marshmallow!) Quality family time during COVID-19 outbreak. I’m not feeling ready to reopen just yet. #family #saturdaynight #firepit #lifeathome #backyard #smores
Homemade hummus in a bowl from Jerusalem. Cocktail hour is here! #fridaymood
A festival of forest ferns for Friday. #forest #ferns #friday #woods #green #nature #beauty #hope #walk #contemplative