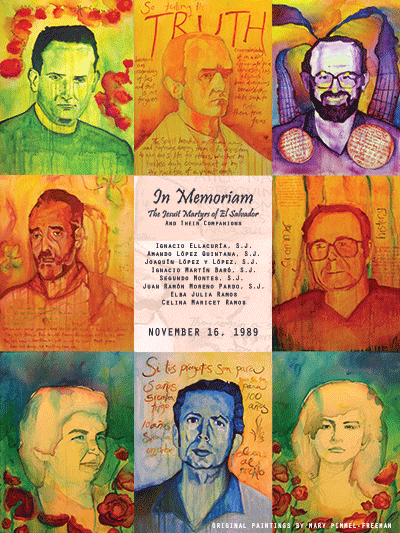 On this day in 1989 a group of Jesuits and two women who worked with them were martyred in their home in El Salvador. They are known today as the Jesuit Martyrs of El Salvador.

You can read more about the incident from this link, a from The Jesuit Post in 2017. Below you will find a video that also goes into their story. As will all those who have gone before us, may their memory forever be a blessing. As with all martyrs, especially those from El Salvador in the 1980’s, we say ¡presente! after their names because as ever, they are present, they are with us, they remind us to press on in the name of justice that can only come through the peace of the Gospel. Their lights shine on, may we always keep those flames burning, passing the light to others with every action in our lives.

Today we celebrate All Saints Day. Do you have a favorite saint? If so, who is it? I am hard pressed when I ask myself that question… St Francis, St Teresa of Avila, St Ignatius Loyola, St Juan Diego, St Kateri Tekakwitha, St Dominic…  I could go on and on. Also there are those on the way to sainthood, such as Blessed Oscar Romero, Servant of God Isaac Hecker, and so many more.

The saints remind us that God works with what God has made and with what we bring when we show up. God can transform all of us, no matter what. Thanks be to God!

Evidence of the both/and nature of the church. Things are proceeding at their lentamente/subito pace, with dates for the canonization of both men scheduled for April 27, 2014.

This marks two adaptations – one is that Bl. John Paul II will be made a saint in record time for our contemporary era. The other is that Pope Francis has made it possible to move forward with the canonization of Bl. John XXIII without the required approved miracles.

Despite the feelings that I had regarding fast and slow, written about in a prior post (see  Santo subito? Santo lentamente?), I do believe that the dual canonization is a good and beautiful thing.

In the tiny speck of history that is our time, I suspect that future generations will see a profound symmetry and a call to unity in this action.

I am ever grateful for the presence of the current Bishop of Rome, Francis, who advances these things with grace and wisdom.  AMDG! 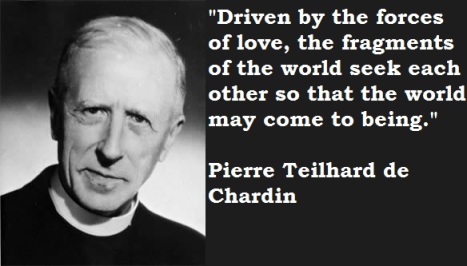 Today marks the death of one of my heroes of the faith – Pierre Teilhard de Chardin, SJ. Although known today, he died in near obscurity, as he was largely silenced for his work during his life. Today is the anniversary of his death.

When I work with teenagers for confirmation preparation, they often tell me that science is the challenge between them, or one of the challenges, a belief in God. That is when I play the Teilhard de Chardin card, because when I tell them that he was a paleontologist, they are often surprised.

When I work with myself, at times frustrated with Church, I play the Teilhard de Chardin card for myself. He was silenced, I remind myself – and he was doing really important work. I am reminded of something I once read that said that turning up the oven does not result in a cake baked more quickly. Would Teilhard de Chardin be the giant that he is today, if not for the timing of how his work became known to the world?

Yes skeptics, I hear you thinking that this is a huge rationalization on my part. Maybe, but maybe not. Over 50 now, I have become more aware of how my own timing ins not usually in the best interest of anyone but me. And at this point in my life, I have lost most  of the interest in the supremacy of my own timing and interest. (Note: most of…)

Yesterday I had a good cry born out of frustration over a church related matter. Today I am still upset, but tempered by this as-yet-uncanonized patron saint of mine.

I love the words along with the picture above. It is good science, but it is great theology, great eucharistic theology. Such things are not incompatible – they never were, and they never will be.

God is very patient with us, may we be so patient with one another – and with our selves. Pierre Teilhard de Chardin, pray for us!

Postscript: I have one final paper due for school; it is to be delivered at a colloquium on Saturday. Needless to say, I have not completed it, so it seems unlikely that any blogging will come from between now and then. Since I have to go out of town for said colloquium, it is unlikely that I will post anything else before Monday. I graduate, one month from today!