October is designated as the month of the Rosary. Does this idea make you want to roll your eyes? With images of a kind of quaint piety tumbling through your imagination. Perhaps you are reminded of times when old grandmothers and other elderly women were seen in church, clutching their beads.

As for me, I am very sentimental about the Rosary, but not in a way that is pious or saccharine. It was 25 years ago, in late September/early October, that I, as a young woman, clutched a rosary in my hand and made my way back to Church. Anyway, that is a story that I told before, and I won’t retell it today.

As this month begins this year, it is impossible for me to not drift back to the winter of 1989. To say that I was depressed would have been an understatement! My life was in a terrible mess.  Mired in the tangle of a stressful job that I hated, hobbled by debt, and choked with the kind of resentment that ferments into the worst sort of bitter anger, I was in a dark place. Add to that, my mother, who died 24 years ago, almost to this day, was physically ill, and sitting in a pool of her own rage. Oh, and she drank. A lot.

The only respite I had in those days was to flee to a life that was not very real. Every chance I had, I would grab a long weekend or a week, and get on a plane. For that particular journey, I found a cheap fare and headed for Paris. In those days I would not even bother finding a hotel until I arrived… oh those days.

Upon arrival in Paris, I found a very cheap room in a very great location, and then spent the week walking around, shopping, going to museums, sitting in cafes reading a book – and visiting every church that I came across. No, I was not practicing any faith at the time, just my old standby “Jesus ‘n me.” During this time, I did not feel so miserable, the act of solo travel made me feel worldly and exotic. 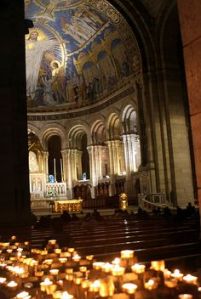 One cold, sleety weekday I made my way up to the Basilica of Sacré-Cœur, a very favorite place of mine. There were few tourists and I had the place mostly to myself. After going around and lighting many candles, I found myself by the gift shop. Poking around, I happened to see a cobalt blue rosary, with very small, elegant beads – and without hesitation, I bought it. I went over to a side chapel and tried to pray – but somehow had forgotten how to pray this essential Catholic prayer. I felt like a failure and I simply asked Mary to please help me… it felt more like a desperate plea than a prayer.

The beads continued to confound me, but I pressed on undeterred. I would make my way into various churches… St. Sulpice, St. Germain, and others, even returning to Sacré-Cœur, and then visiting St. Pierre de Montmartre, a place that would have a later significance for me. And each church meant candles and pleas, with those beads wrapped tightly around my fingers.

The end of my journey arrived, like all journey ends – too quickly. There were other museums and cafes that awaited me, and other churches, so that I could hold tightly on to my beads and pray for some unknown thing! But I got on the train, got to the airport, boarded the plane, and came home. It was one of the most depressing days of my life, mostly because I did not want to return to my life.

What I did not even begin to understand was that my life was already changing. Might it have changed if I did not impulsively buy those blue beads? Who knows, I never think about it.

My sister-in-law, relieved to think I might be returning to the fold, which I had no plans to do, got me a how-to-pray-the-Rosary-brochure. Slowly but surely I re-learned that thing, and I was very happy to leave it at that. God clearly had other plans.

All these words point to one thing – the Rosary, often overlooked, might be more of a source of grace than you realize. If you already pray the Rosary, you know this. It is not a contest or competition, whereby you pray more of them, God like you better. Nope, not at all. I guess the best way to say is that I think that the Rosary, like all prayer, is a doorway that opens unto grace.

During this month of the Rosary, I will be praying for all of you and for our world… I hope that maybe you will join me.

8 thoughts on “The Rosary”