Actor and comedian Chris Farley died in December of 1997.  He was so talented, and so very funny.  This past Saturday his old friend Adam Sandler was the host of Saturday Night Live, and he sang a song honoring and remembering Chris. It was deeply touching to me, and I certainly had a good little cry while watching – along with some laughter.

I have a sharp memory of Chris Farley, and it is not from SNL or any of his movies. One day, not so long before he died, I saw Chris Farley in a place that was unexpected – at least from my point of view. At that time I worked in New York City and often stopped by St Patrick’s Cathedral to light a candle and say a quick prayer.

That particular day I went to the area behind the main altar that is known as the Lady Chapel. It is a beautiful place. At that time there was not as much regular eucharistic exposition as there is now. but it was always a quiet spot in a busy place in a big city. 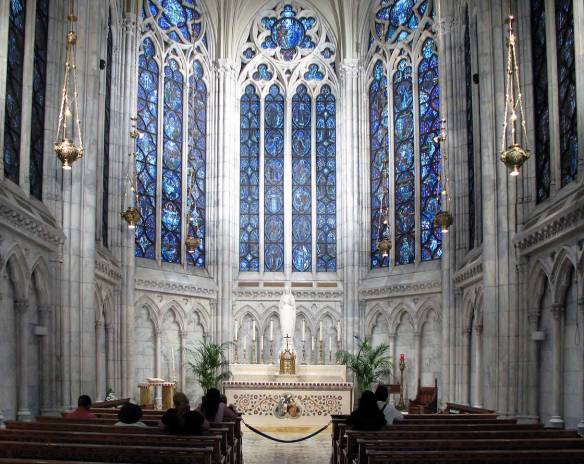 Anyway, there were not many people at that moment, I must have been coming from or going to a client meeting in the mid-afternoon. As I knelt down to pray a man got into the pew in front of me. It was hard to miss him because he was a rather large man. He crossed himself and genuflected as he slid into the pew, but then he slid down to the other end of the pew and knelt down as he gazed up at the statue of Mary the Mother of God.  The next think I know, he put his head into his hands and began to sob – and it was not a quiet sobbing. His entire body shook and I felt as if I were in this most intimate of moments where someone is just laid bare before God. He was just so vulnerable.

Not wanting to stare, I put my own head down, trying to pray as he cried and cried. It felt so sad. What sent him here in this state? Eventually his sobs seemed to quiet, although he never took his head from his hands. All I could do was pray for him. I thought of his funny persona and his many movies and SNL appearances. Yet he was as human as anyone and suffering greatly on that day – apparently suffering on many days.

At about 1:40 in the song, Sandler sings about how drunk Farley would get after a show – and yet still, hungover as all get out, make it to morning mass. That’s when I began to cry, because of my memory of this enormous man shaking and sobbing.

Chris Farley died a death brought on by excess, but he too was a child of God – and obviously one who was close enough to God to worship and pray. He has been gone a long time, but I often think of that day in St. Patrick’s. May Chris Farley rest in the peace of eternity with God, may his memory forever be a blessing.

4 thoughts on “May his memory be a blessing”